Last Friday night (November 1,2013) I had a wonderful evening cooking with friends

Denita Arthurs, Carol Tomalty (although she didn’t cook much she was great support), Kenji, Meredith’s boyfriend and Meredith.  Ron and Rick, Carol’s husband helped afterwards with clean up so we let them eat our well made food.

I decided to make Spinach Stuffed Leg of Lamb and Stuffed Chicken  Breasts.  But, quite frankly, I can’t remember what I stuffed the Chicken with.  Oh well, maybe the pictures will trig my memory.

For the stuffed lamb, you take 300 g of spinach, rinse and put in pot just with the water clinging to the leaves over medium heat until wilted, about 5 minutes.  Cool completely and squeeze out excess water, chop coarsely and place in bowl. 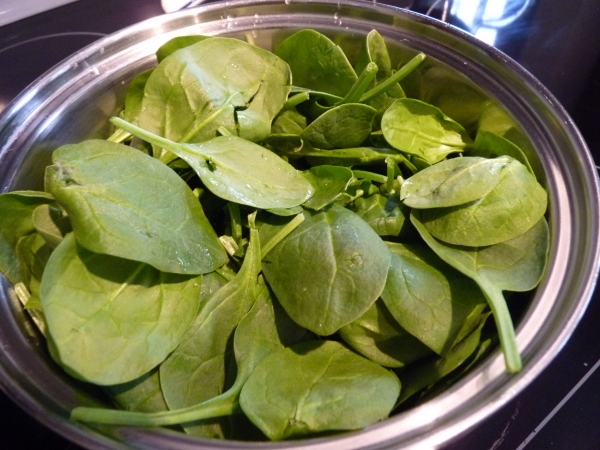 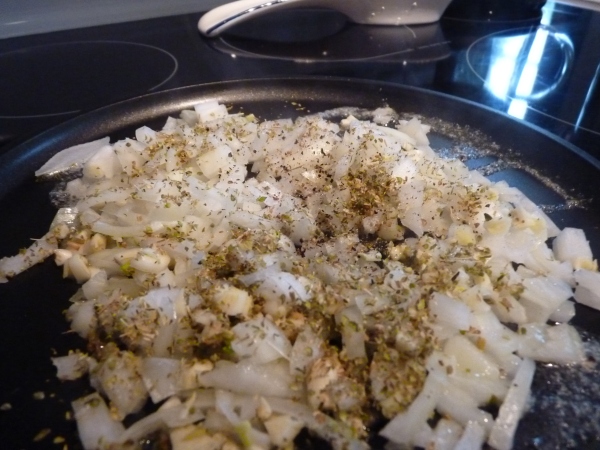 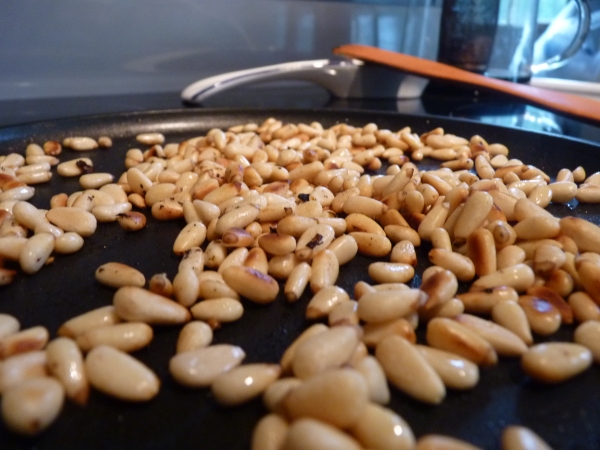 You could chop these pine nuts to make them a bit smaller.  I wish I had done that as I thought they were a bit big in the stuffing mix.

Oh, before I go any  further,   I should say the night before, Meredith and Kenji were in the Halloween mood…. it is Kenji’s favorite holiday… and created these festive pumpkins 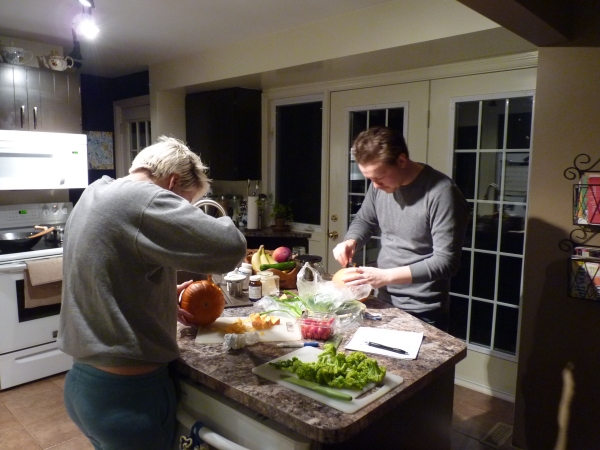 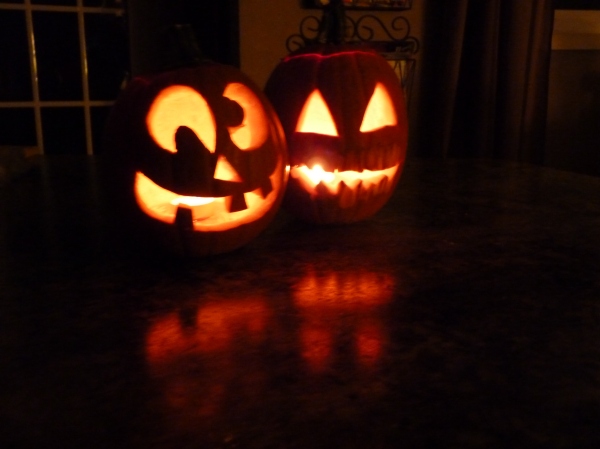 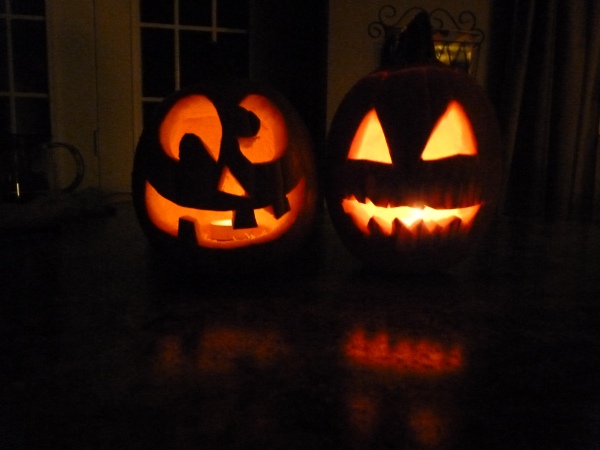 Okay, back to the lamb.

Sprinkle lamb with salt and pepper and spread the spinach mixture and roll up. 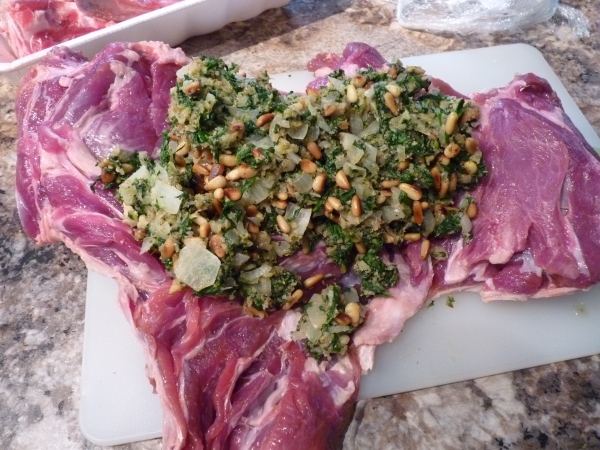 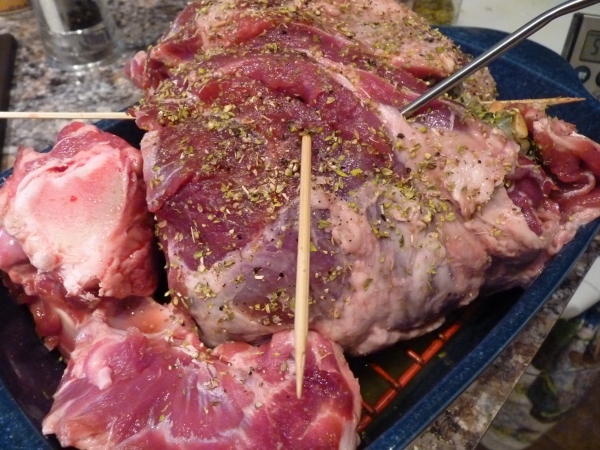 I usually use meat string but the butcher forgot to give me some so I used wooden skewers to secure the lambe around the stuffing. 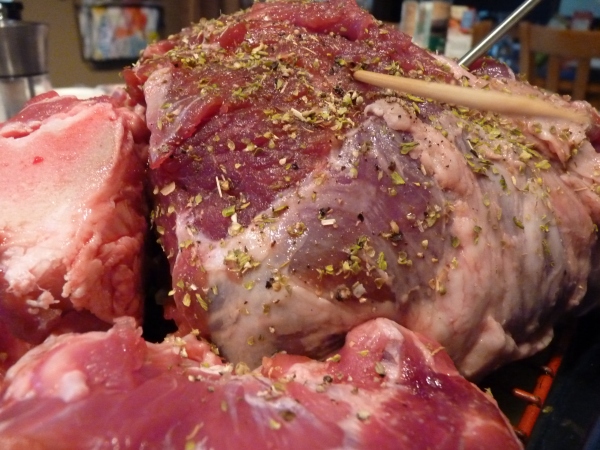 Rub with oregano, salt and pepper and place on greased rack in roasting pan. Pour 1 cup of chicken stock and 1/4 cup dry white wine  and place in 325 degree oven until meat thermometer registers 140 for rare or 159 for medium about 1 to 1 1/2 hours.

Remove from oven and transfer to platter and tent with foil for 15 minutes.

Stir 1 tbsp flour into 2 tbsp. of chicken stock, add to pan drippings over medium high heat, stirring for one minute.  Add 2 cups chicken stock and bring to a boil. Reduce heat and simmer for 5 minutes or until thick.  If you are going to take the time to make this wonderful tasting gravy, you should at least serve it with the lamb.  Which I  did NOT do.

Since lamb is not a favorite of all living souls, I decided to chicken as well. 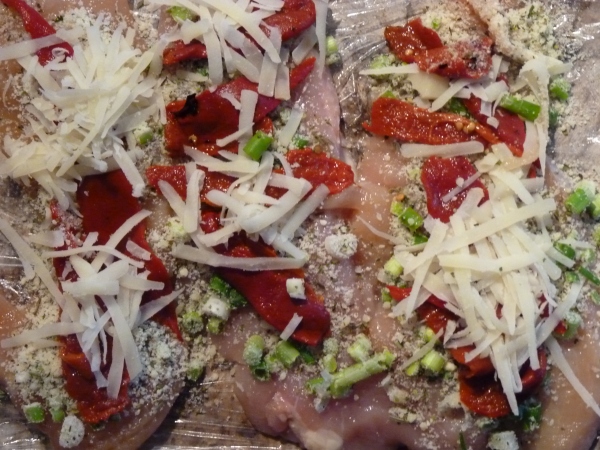 So, if I remember correctly, I stuffed these with green onions, roasted red peppers, salt, Parmesan and some Asiago cheese. 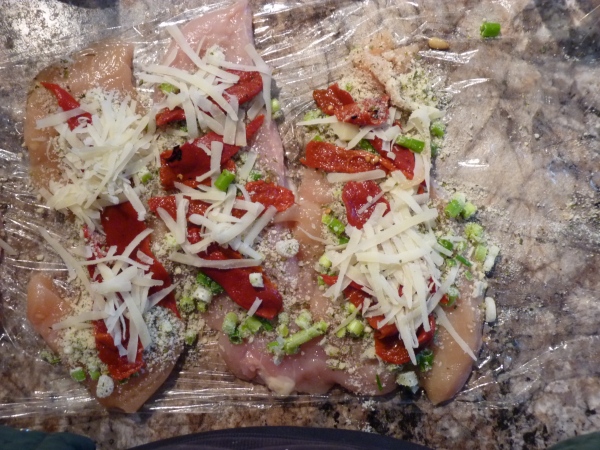 Roll them up and cook them until they are done.  How’s that for a recipe. 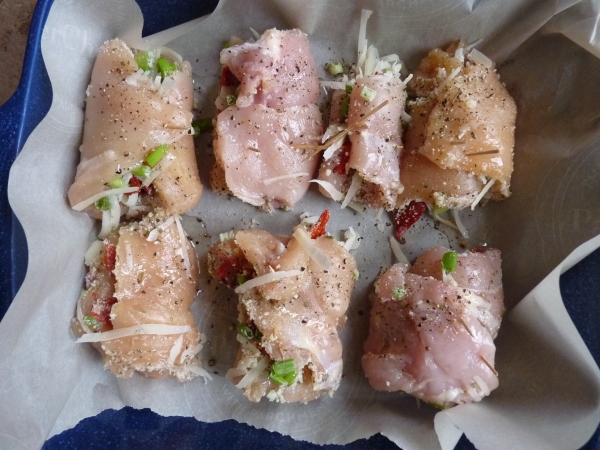 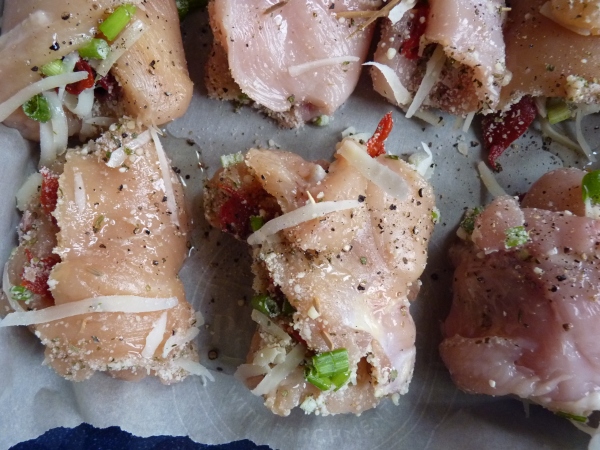 They were very good.  Don’t cook them too long as they will get a bit dry because they have been pounded and are thinner.

Now my camera went to Carol to take pictures while WE made some more food and she, well….took pictures.

The following pictures do not necessarily reflect the views of the blogger . Look at your own risk.

This was my centerpiece. 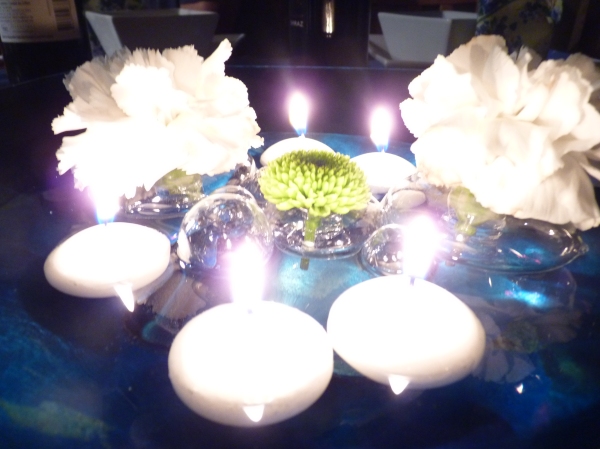 Then she decided to take a few pictures of our bottom halfs. LOL 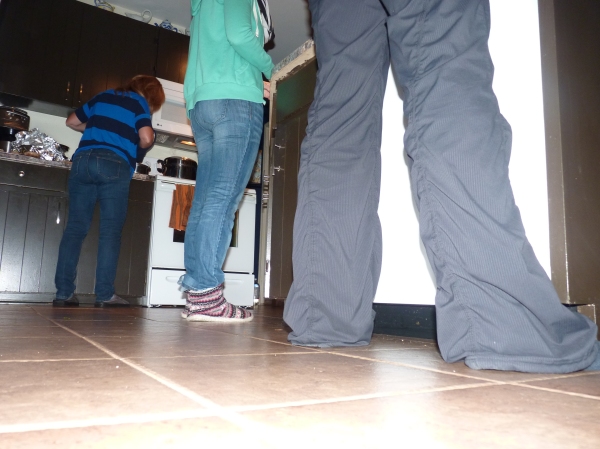 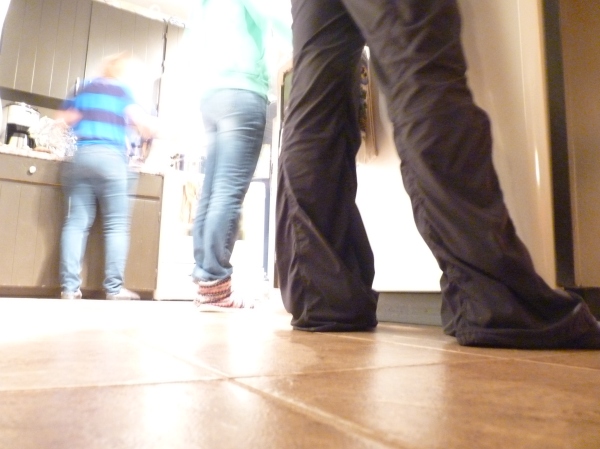 Even better when I took if for lunch on Monday. 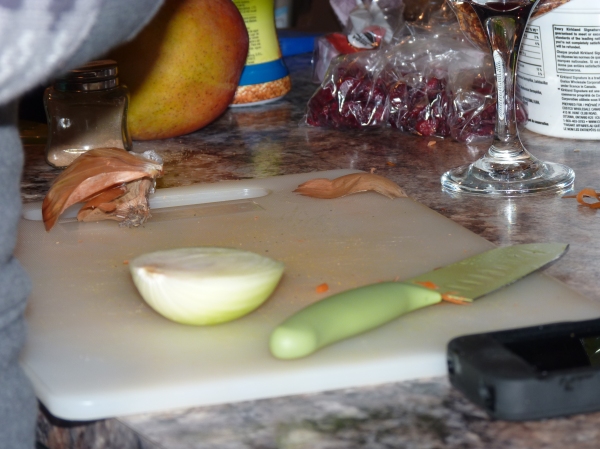 Denita cooking the chickpeas for the top of the soup. 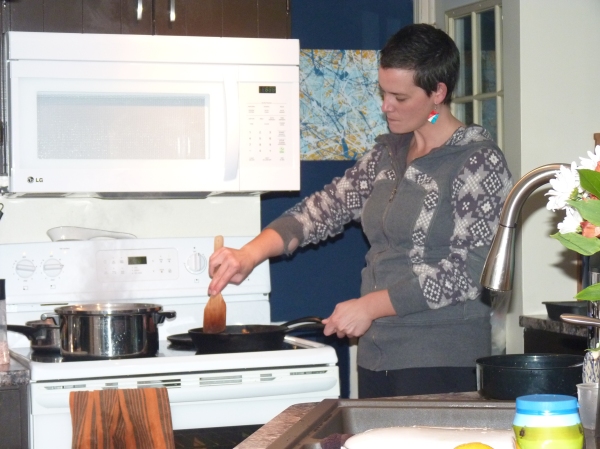 I wasn’t watching how this recipe was made very well since I was doing other things as well but I do know that we decided not to roast the carrots as it would take some time so we boiled them.  Denita and I both thought the roasting probably would have added more flavor.  I believe Carol did not have an opinion. 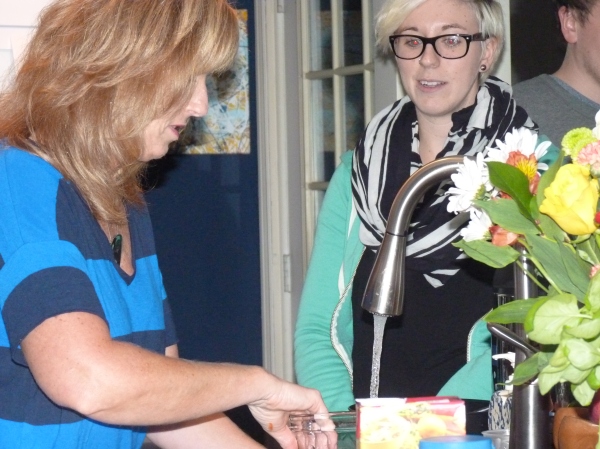 I was doing a lot of cleaning up as Denita created her masterpieces, Meredith made her dessert, Kenji made his mushroom caps and Ron and Carol drank wine.  Something isn’t quite right with that!

The boiling of the carrots. 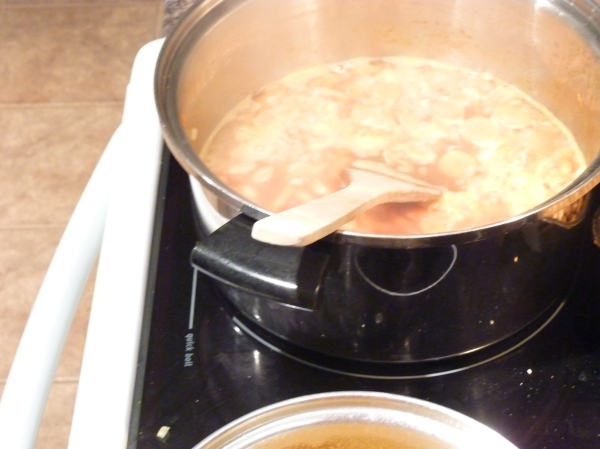 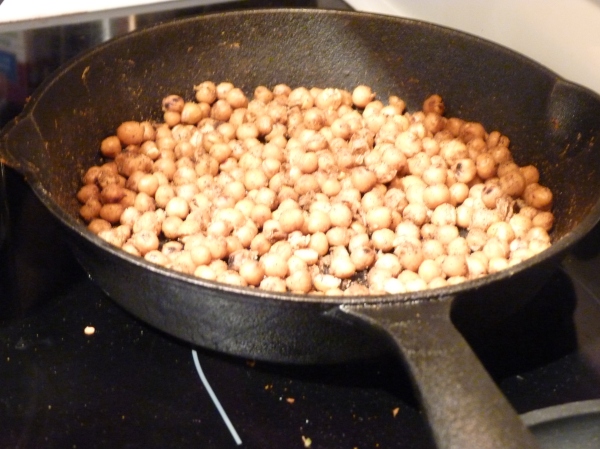 The garnished soup.  Greek yogurt, chickpeas and Tahini sauce.  It was excellent. Thank you Denita. 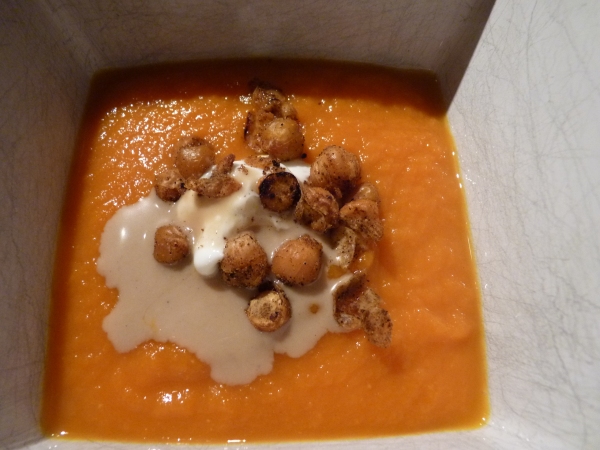 We cooked the quinoa in my rice cooker.  It works great and leaves the stove free for whatever Carol was going to make.  Oh wait!! she didn’t make anything!

For the fruits and veggies

For the lemon basil dressing

While the quinoa is cooking, combine the fruits in a bowl and refrigerate till you are ready to serve the salad.

Whisk together all the dressing ingredients, except the chopped basil. Refrigerate till you are ready to serve. Chop and add the basil to the dressing just before serving. If you add it earlier, it will go black.

Add half the dressing to the quinoa and mix gently.

Assemble the salad just before serving – toss the quinoa, fruits and cucumbers together. Serve other half of the dressing on the side. Serve  immediately.

Eliot is chatting up Denita while she cuts up the mango. 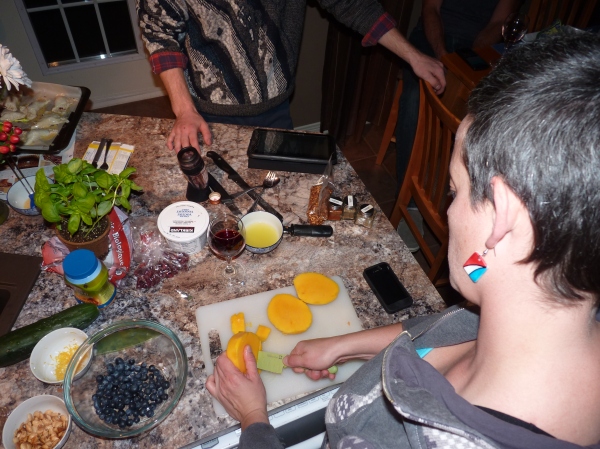 Great salad. Picture does not do it justice.  The flavors of blueberry and mango were wonderful together.  Definitely a recipe I will add to my cookbook. 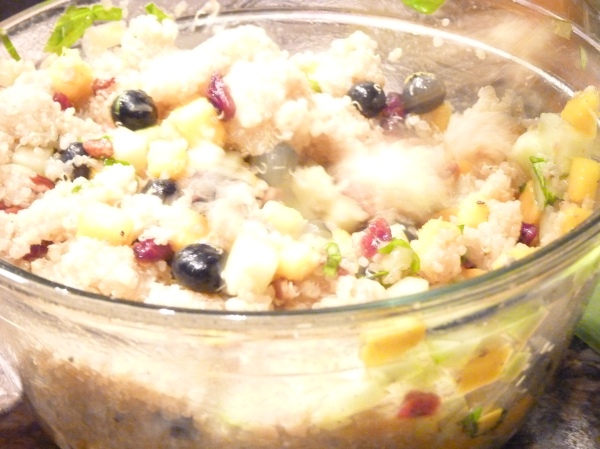 Kenji made mushroom caps filled with various cheeses and bacon and I am not sure what else but they were a  big hit, so much so that we did not even get pictures of them.

Meredith made Pumpkin pie squares which we did also not get a picture of but were also very tasty. I think we all would have enjoyed them even more if we hadn’t eaten so much.  Pretty much pumpkin pie in a pan rather than pie plate. 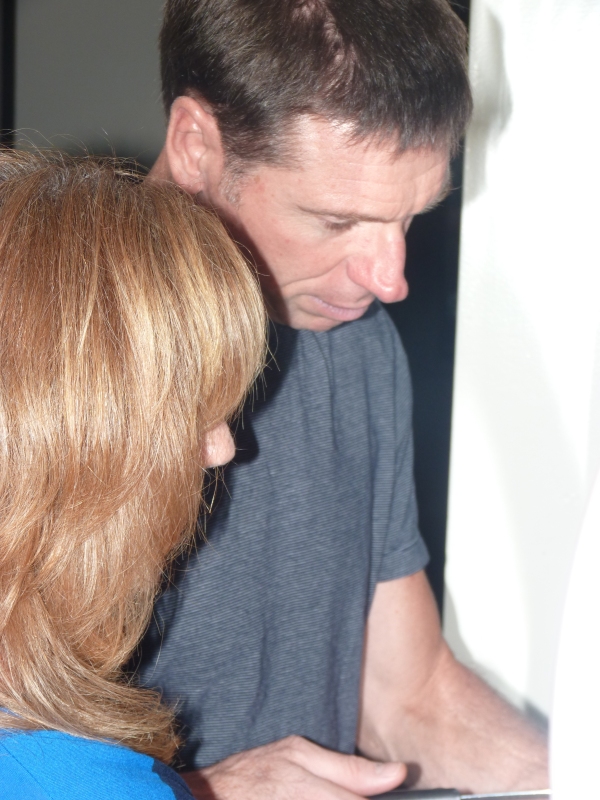 Ron has a knife here and I am not sure what I am doing.  He is smiling so I assume it has something to do with food. 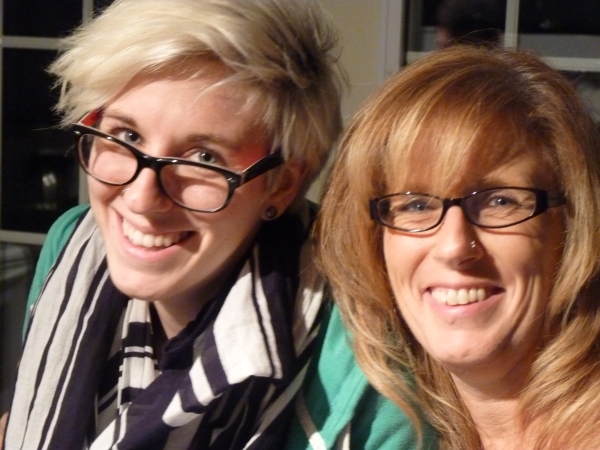 This is before we ate.  Not that we were not smiling after we ate but it was a bit more strained because we were so full of such a great combination of foods. 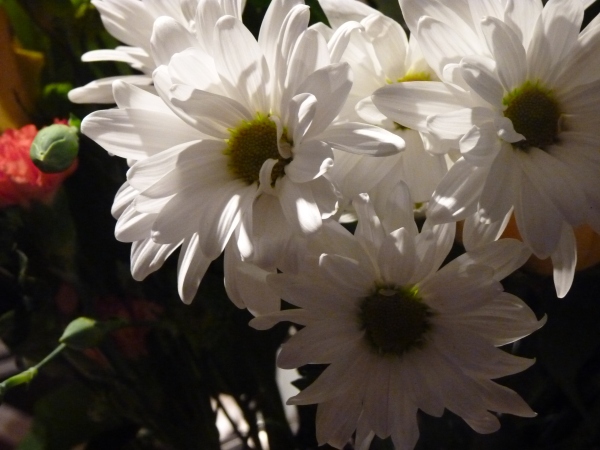 This is the second time Carol and Denita and I did this and I hope there are many more times with many more interesting and challenging recipes.  Hopefully Meredith, Kenji and Eliot will be able to join us.

And, as much as I kid about Carol not doing any cooking, she is awesome and helping any way she can.  And she brings great gifts that I have to plant.

Thank you all for cooking, cleaning, eating and coming, (even Rick at the perfect time), I had a marvelous time.

Until we meet again.

4 thoughts on “Cooking with Friends”